The sauna and laundry, made from concrete edging stones, were completed in 1937. The appearance of the building remains unchanged to this day. The sauna was in the left wing of the building and the laundry on the right. The attic was originally used as a drying room for the laundry and also housed a cold-water reservoir. The laundry room had built-in 150-litre cast-iron boilers for washing laundry, in which seasonal workers’ working clothes and dormitory bed linen were washed. As living space was cramped during seasonal work, rooms for the women’s dormitory were later built in the sauna attic. A separate external timber staircase was built as an entrance to the building.

The riverside pool, which was originally constructed for the power plant’s cooling water, also saw active use. In the 1950s, wooden walkways were laid by the pool, from which it was good to catch fish or soak up the sun. 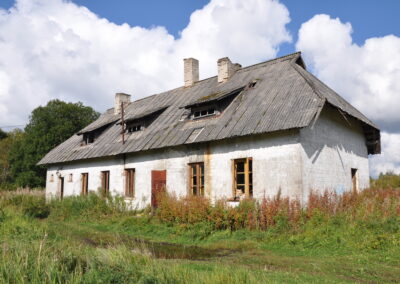