The first Rabasaare store was destroyed in a major fire in the spring of 1939. A decade later, in April 1949, the store and canteen were moved to the more spacious summer barracks no. 15. The supply of goods was initially by rail only, as there was no road connection with the peat plant’s settlement. A locomotive brought the wagon with the goods up to the back of the store. There, the goods were lifted onto a small railway platform, which was referred to as a trolley. This trolley was then manually pushed along the section of the railway to the rear stairs of the store. Children also used the empty trolley for joyrides, which did not please the adults in the slightest.

Originally, there was a canteen in the same building as the store. Before it was closed for good, the store was called ‘Raba’ and was the only business to operate in the building, as the canteen moved to nearby barracks no. 12 in the early 1970s (the building of which survives to this day). The empty store was demolished and its construction materials were used elsewhere for a new building. 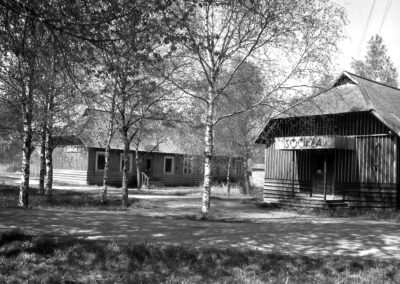