The first written records of the existence of a kindergarten at Lehtse Peat Plant date back to 1946. According to an inventory report from 1 January 1949, the kindergarten was located in building no. 3, the manager’s former house, and had 20 beds. Major reorganisation took place on 2 January 1958, when the kindergarten was merged with the nursery and the institution was renamed Lehtse Peat Plant Children’s Day Care Centre. At the time, the kindergarten was located in timber barracks no. 14, which had been converted into a more child-friendly space. Improved conditions for children were created in 1970, when they moved back to the manager’s former house, building no. 3. The house had previously been emptied after the plant’s director, J. Laansalu, relocated with his family to the newly built house on Uus Street in Lehtse in the autumn of 1968. The building’s interior was reconstructed for use as a kindergarten, with some of the inside walls being demolished. The kindergarten was closed on 1 February 1992. There were 17 children enrolled at it at the time of its closure. 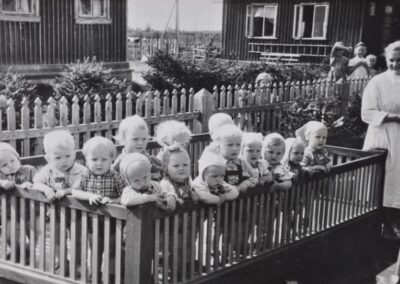