It was mainly the summer barracks which were used as dormitories, and only then during the summer months of peat production. These buildings mostly had kitchens, while some individual apartments had separate kitchens and living rooms of their own. These were usually given to families. During the post-war period, several dormitories were rebuilt following the room system. Of the older dormitories, building no. 7, which was built in 1937 as a residence for motorists, survives to this day. There were eight kitchens and two apartments with a kitchen and a living room on the ground floor. As there was a constant shortage of living space during the peat production season, the attic of building no. 7 was rebuilt as a dormitory prior to 1949. Dormitories no. 5 and 6 for permanent workers were built from stone and were designed by civil engineer Dimitri Tõnisberg. 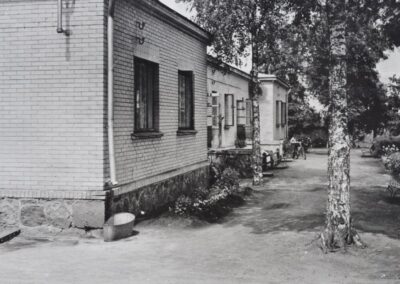