The most popular form of entertainment after work was playing volleyball. The court was set up in front of building no. 9. There were also two burial grounds at Rabasaare. While one was planned for German prisoners of war in a small grove outside the settlement, the second site was located right in the middle of the village, at its busiest point, where two Red Army heroes are said to have been buried. A red timber obelisk with a pentagon on top was erected on a rectangle-shaped hill. A low garden made of wooden boards was built around it. The German soldiers’ cemetery on Parmumäe Hill was officially opened on 2 April 1946 and closed on 8 October 1947 once all prisoners of war had been removed from Rabasaare prison camp no. 286. Two German soldiers are buried in the cemetery: Otto Freler and Leopold Herst. This is where their struggle ended – far from home, on foreign soil. 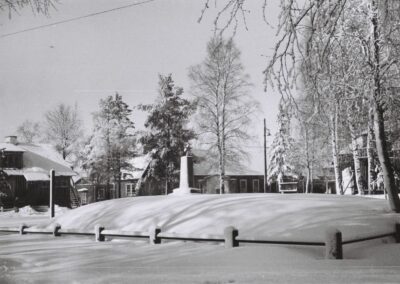