While cultural institutions were usually called a clubhouse, community centre or cultural centre, at Lehtse Peat Plant theirs was simply referred to as a club. Where it stood there had initially been winter barracks for 20 peat workers, constructed in 1937. The great fire of 1939 started in this building, which burned down completely. A new building was constructed in its place. Major renovations took place in the club in 1952, when an extension was added to the building, where the Red Corner was then located. The building was adorned with a new watchtower, with the five-pointed red star on its flagpole. The club showed films and hosted dance evenings and performances by the local amateur dramatic society. Next to the greenroom, on the second floor, was a radio unit from which music was broadcast via wired radio to the buildings and to the loudspeaker on the top of the pole outside. The club was burned down in an act of spite in 2009. 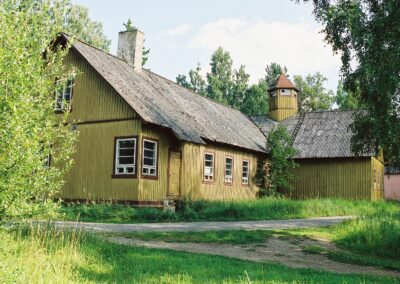